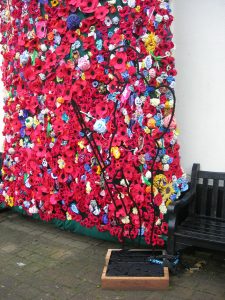 The silhouette of a WWI soldier has been set up outside the Guildhall.  The soldier is part of a nationwide art installation called ‘There But Not There‘, as a reminder of the ultimate sacrifice made by so many during the war and in doing so raise funds for the charity Remembered.

Close to the war memorial, ‘visible’ to all passers by and backed by a wall of poppies, this is a good place for a soldier.  The beautiful poppies, crafted by the Bradninch WI and others  have blossomed profusely, just as their real counterparts did on the fields of Flanders a century ago.  The purple poppies are a reminder of the thousands of animals that also served, and died, during the war. 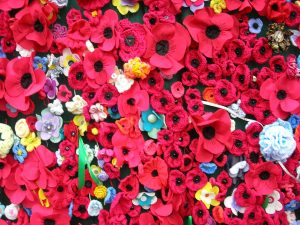