Originally dedicated to St Denis, the parish Church of Bradninch became more popularly known as St Disen’s in the later 19th century.  According to legend St. Disen was a 7th century Irish hermit who visiting this area, found no place of worship and so built the first church with his own hands. Our present church dates to the 15th and 16th centuries but like many churches was restored in the 19th century.

Within the church, stretching across the nave is a wooden screen dating from the 15th/16th century.  Its  painted panels include depictions of the temptation of Eve, the Annunciation, the Christ Child and 12 sibyls, Greek and Roman prophetesses who foretold the great mysteries of the Christian Faith.  Within the side chapel is a smaller screen bearing paintings of St Michael, St George and the Dragon, St Christopher and St Francis of Assisi.  This chapel was renovated as a war memorial in 1917 and dedicated to St George.  Our Lest we forget page has more information on this and our other war memorials.

The pulpit, pews and choir stalls are also 19th century in date as is all the stained glass.  The latter, however, are not without interest.  The Resurrection Window above the altar was designed by a local parishioner, Sarah Yeatman in memory of her parents while the window in the south wall was donated by American Congressman George West in memory of his mother, Jane West who is buried in the churchyard.  On the north side of the church are the flags of the United States of America and Kentucky which frame a plaque in memory of the Boone family who emigrated to America in 1717 and in particular of Daniel Boone, another of our American Connections.

The Royal Arms above the Tower Screen at the back of the church commemorate the visit of King Edward VIII in 1936 and the small statue of St Disen near the door was carved by local farmer, Jim Vallis.

The tower, which houses 8 bells, is best appreciated from the churchyard, is about 24 metres high.  It dates from the 15th century but was partially rebuilt following a great storm in 1886.  On the left side of the path leading down to the main entrance is a freestanding 15th century cross  which probably erected as a station for outdoor processions.  It was restored in the 19th century and is now a scheduled ancient monument.  A plaque on the railings adjacent to the gates commemorates Squire Boone who was baptised in the church on Christmas Day 1696 and who was father of Daniel Boone, mentioned above.  Below is a Commonwealth War Graves Commission plaque; there are 8 war graves in the churchyard. 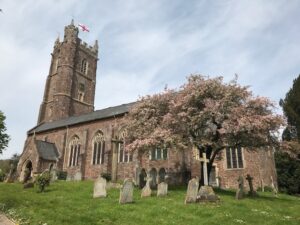