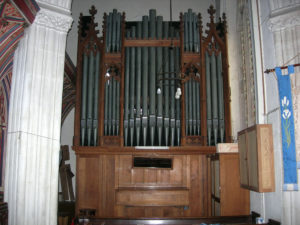 The earliest reference to an organ in St Disen’s Church is in 1840 when £300 was voted at a vestry meeting (1) for the completion of repairs and improvements to the church and for the provision and fixing of a hand-organ.  This organ, which was built by H. P. Dicker of Exeter (2), stood in a gallery across the tower arch at the back of the church.  Entries in his account books for repairs and tuning indicate that Mr Dicker continued to look after the organ in the succeeding decades.

In 1880, however, the church was bequeathed £200 for a new west window from the estate of a Mr Linnington.  The matter was duly discussed at a vestry meeting in May 1880 and, from an article published in the Exeter & Plymouth Gazette (3), appears to have provoked some lively discussion.  Revd Strong, vicar at the time, felt that the bequest together with a proposal to build a south porch provided an opportunity for ‘beautifying the church’ that should not be let slip by.  He thought the gallery and organ were ‘detrimental to the architectural effect of the interior’ as they blocked out the light from the west window.  The proposed works, therefore, included the demolition of the central part of the gallery and removal of the organ to the east end of the church.  The proposals, in particular that of moving of the organ, were vigorously opposed by C. R. Collins (4).  It seems that Mr Collins was generally against the ‘new-fangled idea’ of restoring Devon churches and, in support of his argument, he recalled that a proposal to move the organ had previously been made and rejected in 1865.

The objections, however, were overcome and in June 1880 a faculty was granted for major alterations which included a new stained glass window, removal of part of the gallery and the relocation of the organ to the north side of the chancel and a new south porch (5).  The organ was moved in August of that year by W.H. Hawker who then gave a recital on the instrument in its new location which, according to the Exeter and Plymouth Gazette (6), gave much pleasure to the large number of parishioners who attended.

In 1890, the organ was rebuilt, incorporating elements of the original organ, and enlarged, with a new oak case and front pipes of polished zinc, by Messrs Hele & Sons of Plymouth at a cost of some £200.  A special service was held to mark the opening of the new organ culminating in the Hallelujah Chorus.

The organ has remained largely unaltered since.  It is very compactly planned, constructed on much the same footprint as the original instrument.  The swell department is placed above the great rather than behind, as would have been more usual for the period.  The action, including the pedal action, is largely mechanical.  The tallest pipes are 2.4 metres high and in addition to the 56 notes on the keyboard, the foot pedals can also play 30 different notes.  Tonally, it has been described as a very pleasant instrument, well suited to the size of the church.

The organ was restored after the end of the Second World War and again in 1979, thanks to a bequest by F. A. Nicks in memory of his parents.  However, with the subsequent passage of time and woodworm, forty years later the organ is once more in need of repair.  In particular the linkages from some of the foot pedals are worn and broken. 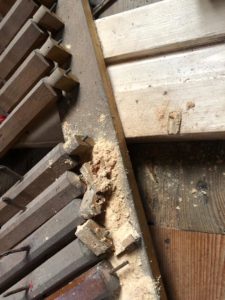 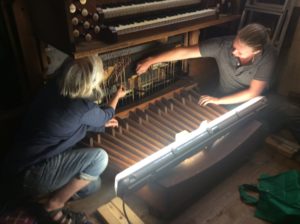 Back in 1890 a special bazaar and other fund-raising events were held to help pay the costs.  We too have held coffee mornings and a concert in order to raise funds for the repairs that are now in hand and and we take this opportunity to thank all those who have supported us in any way, so that the organ will once more sound again as it was originally intended.  Similarly, we also plan to hold a concert once the repair works are complete, at which the organ will hold centre stage.

(1) A meeting of parish ratepayers chaired by the parish incumbent.  Such meetings were originally held in the vestry of the parish church (link to Wikipedia).  Now divided into parish/town councils and parochial church councils.

(4) Charles Robert Collins, JP, was Mayor of Bradninch at the time and owner of Hele Paper Mill

(5) The subject of the new west window, chosen by Revd Strong was ‘The Judgment’, the artists Messrs. Hardman of Birmingham.  The new south porch was proposed as a memorial to William Drew, former owner of Kensham Paper Mills, who died in 1875.  The rest of the gallery under the tower was removed under a faculty granted in 1889 and which also included the installation of the heating system, new seating and the pulpit.